Doctors had said that when switching shadowless lamps from halogen to LED light, the glare was causing eye strain, and were concerned about the safety of light for their eyes, thinking that the cause might be related to the blue-light risk from blue LEDs.
In response, along with Dr. Takeshi Ide of Minami Aoyama Eye Clinic, we prepared normal LEDs and our recommended Medical LEDs that are gentle on the eyes and compared their peak blue light values under direct illumination.
The results showed that blue light peak value in violet LED peak was roughly 1/2 that of blue LEDs, and Dr. Ide concluded that violet LEDs were more gentle on the eyes than blue LEDs.
Results of Joint Study with Dr. Ide 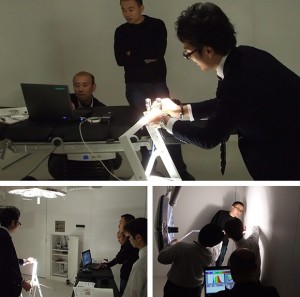